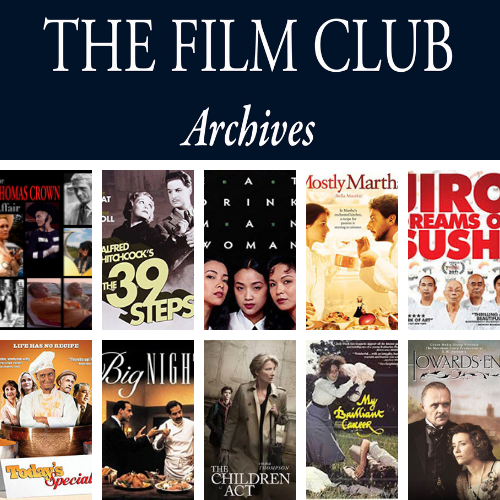 The Weston Public library Film Clubs hosts a handful of film series each year. Lead by our resident film buff, Doc Crane, the film club offers patrons the opportunity to see the cream of the crop within a theme or genre with other movie lovers.

For those of you who missed our previous Film Club screenings, a number of those movies are available on Hoopla or Kanopy. Here is a listing and where you can access them. Also, I’m more than halfway through the 10,000+ titles on Hoopla to see which ones I can recommend, so I’ll have a list coming up soon

Based on the classic espionage novel by John Buchan, The Thirty-Nine Steps involves one of Hitchcock’s favorite themes: an innocent man on the run. Robert Donat plays the affable Mr. Hannay, an average fellow who encounters a mysterious woman claiming to be a spy pursued by enemy agents. When she is murdered, Hannay becomes the lead suspect, and his only chance  for exoneration is to stay one step ahead of police and spies alike. Not Rated, 86 Minutes, 1935

This film is available here on Hoopla.

Set in Taiwan, Ang Lee’s film tells the story of Mr. Chu, a master chef whose Sunday meals with his three adult daughters are both a joy and a challenge as his traditional values conflict with their modern aspirations. In Mandarin with subtitles.  Not Rated 124 minutes, 1994

Ever-precise Martha is the head chef at a French restaurant in Hamburg. All other concerns in her life are secondary, which proves a problem when she is forced to take in her young niece and also get along with a newly arrived and a very out-of-the-box Italian sous-chef. In German with subtitles.  PG, 109 minutes,  2001

In this documentary by David Gelb, Jiro Ono is an 85-year-old sushi master whose modest ten-seat restaurant in a Tokyo subway station has been rated with three stars by Michelin. Considered by many to be Japan’s greatest sushi chef, Jiro spends each day finding new ways to perfect his twenty-course tasting menu, and in the process creates a methodical, nuanced universe of cuisine and patrons. In Japanese with subtitles.  PG, 81 minutes,  2011

Samir is a sous chef in an upscale Manhattan restaurant. Passed over for promotion, he decides to study haute cuisine in Paris, but his father takes sick, obliging him to take  charge of his family’s struggling Indian restaurant in Queens. Samir grudgingly comes back to his culture––albeit in a very New York way––with family, food, and romance not far behind. Rated R (for inevitable kitchen profanity) 99 minutes, 2009

In the film that launched their careers, Tony Shaloub and Stanley Tucci are Primo and Secondo, two brothers from Abruzzo who are determined to bring authentic Italian cuisine to the 1950s Jersey Shore.  With two very different visions of the American Dream, the brothers struggle with each other as they try to keep their restaurant afloat in spite of the big, loud (and highly successful), red-sauce joint just across the street. Rated R (kitchen profanity and copious amounts of ‘50s smoking), 109 minutes, 1996

The film is available on Kanopy.

For decades, the Michelin Bib Gourmand restaurant guide has been the Holy Bible of Haute Cuisine. Three Stars, a documentary by Lutz Hachmeister, examines ten restaurants that have received Michelin’s iconic top rating. Offering a behind-the-scenes look at celebrity chefs and their high-pressure kitchens in France, Spain, Germany, the Netherlands, Denmark, the USA and Japan, Three Stars ponders what it takes to earn a star, keep a star, and whether the acclaim is a blessing or a burden. Not Rated, 94 minutes, 2009

The film is available on Kanopy.

Norman Jewison returns to Massachusetts and actually films in-state, offering an exercise in essential cool as he sets icons Faye Dunaway and Steve McQueen against a backdrop of fusty old 1967 Boston.  McQueen plays a jaded millionaire who stages a heist of his own bank (for the fun of it), only to find himself in a romantic duel with Dunaway’s oh-so glam insurance investigator.  Consider it a historic artifact with lots of 60’s innuendo, smoking, and ecological damage. Rated R, Some violence (mild by current standards)   104 minutes,  1968

This film is available on Kanopy.