The eight homes along Crescent Street provide a picture of the evolution of the community as means of livelihood changed from the initial settlement until today. Built over a period of 120 years, these buildings are closely linked to a variety of means of income production. 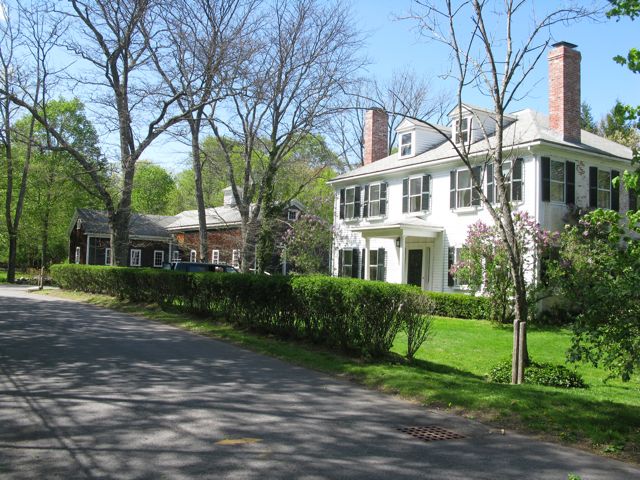 pe or geography. The first settlers from Watertown were attracted by the meadows ideal for cattle grazing in the southern section of what is now Weston, and the town developed as a farming community.

The handsome brick-end home at 21 Crescent Street, built by Luther Harrington in 1812 originally was built to serve the needs of a large farm family. Abraham Harrington had acquired the land on which he established his farm in 1782, the conveyance noting the property’s boundary along the “Country Road.”

Also representing this farming period, the home at 251 Boston Post Road, which fronts on Crescent Street, was built around 1846 by Luther Harrington Jr., whose father had constructed the house across the street. Later owners included members of the Hagar family.

Tavern-keeping, another means of livelihood during the colonial period, is represented in this district. At one time, a small public road, originally a bridle path, ran northward from a point on Crescent Street between the present homes numbered 21 and 29 across farmland to the town road now known as Church Street.

In the mid-1700s, Benjamin Peirce, established a tavern on this road to serve the drivers of wagons who carried loads to and from Boston. Located too far from the more heavily-traveled Great Country Road, the tavern run by Peirce and his son Benjamin Jr. was abandoned in the 1770s, and Peirce relocated his establishment along the more popular route. A foundation or cellar, purposed to be from the original Peirce tavern, can still be seen in the wooded area north of Crescent Street.

Spring-fed streams in Weston attracted industry because of the promise of water power and led to the development of several mills over a period of more than 200 years. An early mill was established as a grist mill and saw mill in about 1678 on Stony Brook, just east of the beginning of Crescent Street.

Three Mile Brook (referred to as Four Mile Brook in early deeds), which runs just north of Crescent Street and eventually joins Stony Brook, provided the power for mills that contributed to the development of the homes along this section of the Country Road. The importance of this power source is evidenced in deed records, which contain frequent references to the transfer of water rights along the stream.

The first mill in the Crescent Street area was initiated some time before 1743. David Sanderson operated a grist mill until 1745 on 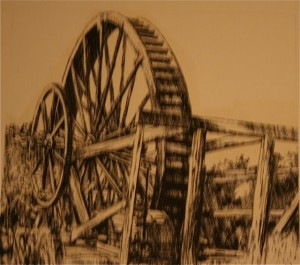 the stream and built a small lean-to there. In 1751, the “privilege to turn water” was recorded in deed records, granting that right to Benjamin Peirce.

The land behind the homes at numbers 39 and 49 provides a graphic example of the intricate waterways that were established to provide power for early mills and factories. Still apparent are the remains of a dam, a millpond, and a canal for directing water from Three Mile Brook. Large water wheels to power machinery were constructed here, and evidence of the supporting structure can still be seen.

In 1830, Samuel F. H. Bingham from Concord bought mill rights on the Three Mile Brook and purchased land on what is now Crescent Street. About 1838-1839, Brigham built the home at 39 Crescent Street. He also established a factory in the area behind this residence. Bingham made machinery for the manufacture of heavy woolen goods and invented the Bingham cheese and butter drill, a highly successful item that apparently was in great demand.

During this same period, Samuel Shattuck used the quickly-flowing stream water to provide power for a chair factory that he established at the point where Sanderson had initially built his mill.

Shattuck’s company prospered. Upon his retirement in 1875, the firm was taken over by Kenney Brothers and Wolkins and later Oliver M. Kenney alone. He specialized in school furniture, manufacturing both chairs and desks. The company was later acquired by George Perry, a member of a family that owned considerable land in the Crescent Street area. At the time of its operation, the factory, located downstream from Bingham’s factory, used a water wheel 28-feet in diameter as a power source. Eventually needing greater waterpower, this successful operation moved to Baldwinsville, Massachusetts in 1917. The wheel remained until approximately the 1940s, providing an interesting landmark.

Records show that Bingham sold his “mill piece” in 1869 to an individual who sold the same piece later in 1895 to three businessmen, Parker, Freeman, and Ross. A year later, Charles Freeman bought out his partners and subsequently operated the company as a screen factory. He produced window and door screens as well as weather stripping until 1933.

The creation of a by-pass of the Town Center affected Three Mile Brook as a power source. Town records indicate that the manufacturer Freeman unsuccessfully sued the Town's Select Board for damages due to the impairment of his water rights at the time of the construction of the by-pass in the 1930s. This second by-pass of the major east-west road was built through a long area of swampland, early known as a source of peat. The present slow-moving stream passing through the woods north of Crescent Street, now largely owned by the Town of Weston as conservation land, no longer evidences the strength to power factory wheels.

Beginning in the mid-1800s, wealthy Boston businessmen purchased large sections of land in Weston on which to build estates to serve as their residencies during the spring and fall. These properties often included homes for the estate employees.

In the Crescent Street area, the Francis B. Sears, Jr. family established an estate that included several homes. These included:

The latter became the home of an Italian immigrant family headed by Joseph Melone, who fixed up the house and also worked worked for Francis B. Sears, Jr. to help maintain the large property.

Yet another means of livelihood was carried out in the house at 247 Boston Post Road. At least two consecutive physician-owners of this property located their medical practices in a section of the house, the last in the middle of the 20th century, contributing to the then popular name of “Doctor’s Row” for this stretch of the Boston Post Road.

Finally, the evolution of the community as home for individuals earning their income in Boston and commuting to the city is represented by the home at 10 Crescent Street, an example of early suburban house design built in the 1920s, when rail service was frequent and convenient.