The Irving Road Area was documented by the Weston Historical Commission in 2007 and includes the following properties:

The following is an excerpt from the Mass. Historical Commission Area Form (PDF).

Irving Road Area is a neighborhood of modest Colonial Revival houses built between 1930 and 1942 by Weston developer John Irving Connolly. Houses are typical of the type of small Colonial Revivals built in Weston during the Depression years of the 1930s. Similarities in scale, massing, style, and setbacks gives Irving Road a pleasant unity.

The area includes 10 houses dating between 1930 and 1942. The two most common styles are the traditional 2-story, 3- or 5-bay, center-entrance Colonial and the 1-1/2 story Cape. One house is brick and the others shingle or clapboard. Most have center chimneys and many have one-story wings and/or Sunday porches extending from the gable ends. Lot sizes are all less than one acre, with the average about a half acre.

Houses are generally in good to excellent condition, although one has been vacant for several years. Several have been enlarged and/or “modernized.” Those that remain unchanged are well-proportioned and include simple, Colonial details such as fluted pilasters, pedimented door entablatures, fan lights, transoms, dentil cornices, and 8/8, 8/12 or 12/12 sash.

The Erlon and Effie Merrill House, 5 Irving Road (1939, Map #5, MHC 1147, Photo #1) is a 2-1/2 story Colonial Revival house with a center entrance ornamented with fluted pilasters and a frieze with trigyphs. The house has five bays at level one and three at level two. Window sash is 6/6.

The Harry and Alice Cloyes House, 10 Irving Road (1931, Map #9, MHC 1151, Photo #2), another well-preserved 2-1/2 story Colonial Revival example, is three-bays wide with one-story sunroom extending south. The well-detailed center entrance is enhanced by a fanlight motif within the triangular pediment, and sash is 8/8 with shutters.

The Frank and Mary Duffy House, 6 Irving Road (1930, Map #6, MHC 1148) is a 2-1/2 story Colonial Revival house with a typical five-bay, center entrance fenestration. Window sash is 12/12. The center entrance is marked by a pedimented entablature. The house has a center chimney and a one-car detached garage probably built at the same time as the house.

The Alan & Ellen Winsor House, 4 Irving Road (1938, Map #4, MHC 1146, Photo #3) is a good example of the 1-1/2 story Cape, which has a five-bay fenestration and center entrance. Sash is 6/6. The shingled house has a dentil cornice, center chimney, two pedimented dormers and a one-car garage probably contemporaneous with the house.

Other Capes in the neighborhood, which have been substantially enlarged in style and proportion suitable to the original structure, include:

The Elmer & Mary McManus House, 7 Irving Road (1939, remodeled 1983, Map #6, MHC 1149) remains similar in scale and setback. The original appearance of Elmer and Mary McManus House, 8 Irving Road (1935, remodeled 1993, Map #8, MHC 1150) can been seen in a photograph in the assessor’s office. It shows the original pedimented entrance porch with square posts, replaced by the present half-round entrance porch supported by columns. The original 12/12 sash was replaced by 1/1. Originally, the first floor was brick and the second floor shingled. Presently, the second floor is clapboard and the whole façade is painted a single color. 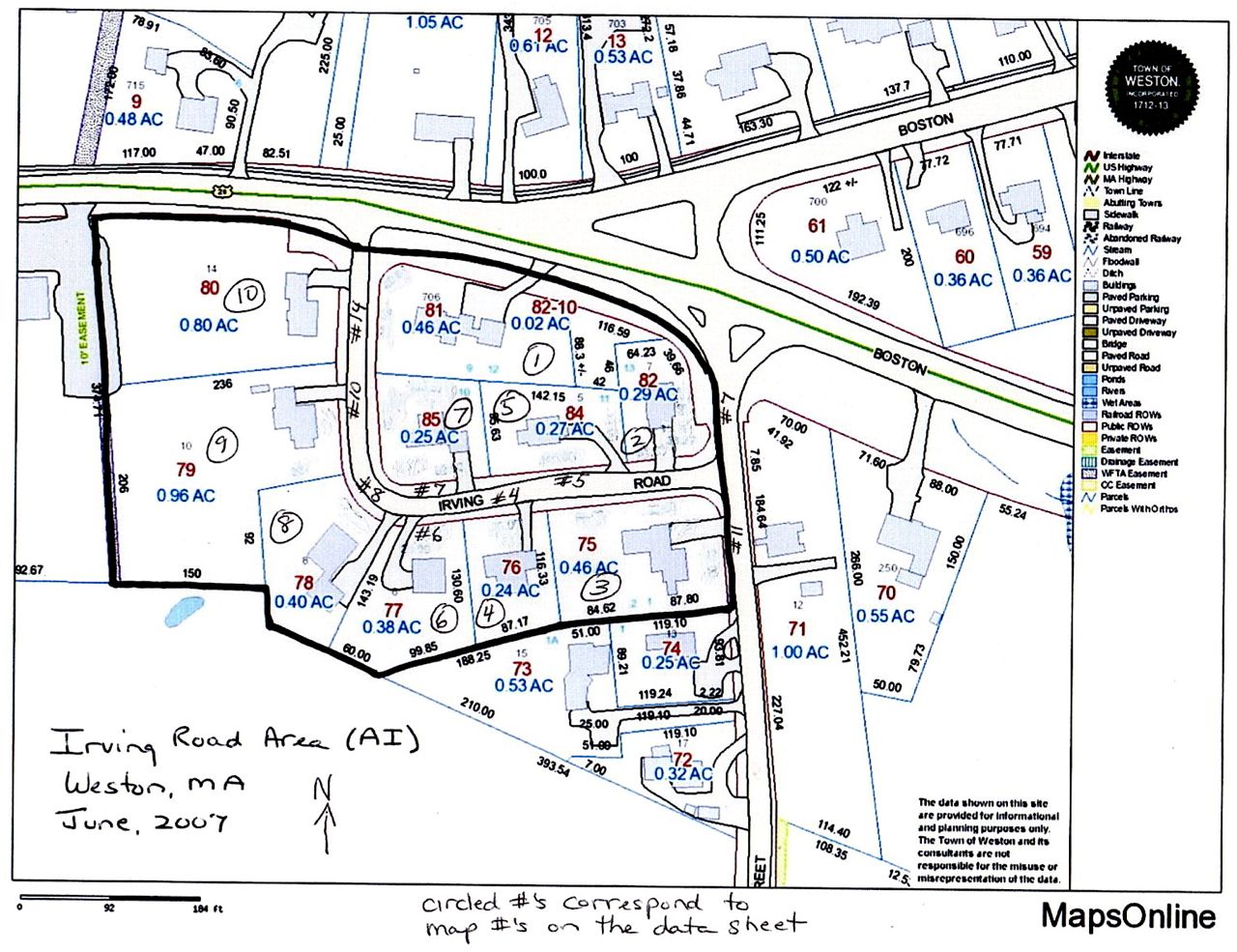