The Lower Conant Area is an example of gradual, unplanned development typical of Weston in the late 19th and early 20th century. Growth of the area proceeded slowly, over the period from 1873 to about World War I and was not guided by any over-all organized development plan. As such, the Lower Conant Area provides an interesting contrast to the Pigeon Hill area, located just across the railroad tracks.

In both areas, the land was owned, all or in large part, by a single family. For the later development at Pigeon Hill, owner Horace Sears had his land surveyed and laid out with uniformly large lots off winding streets. In the Lower Conant Area, the Lamson family farmland was sold off gradually over several decades, first by the widow and later by her estate. With no zoning controls or over-all plot plan, development did not proceed in a uniform fashion. Lot sizes in the area range from under 1/2 acre to 1-1/2 acres, and the size and architectural quality of the houses varies. Rather than developing formal roads into the off-street land, development took place along the main road or off two small narrow lanes (Gowell and Woodward) and several long driveways.

Occupations of early owners include a diversity of businessmen and tradesmen. Some of these houses may have been originally used as summer houses, while others were clearly year-round residences. Some residents may have been attracted to the proximity of the Central Massachusetts Railroad, while others are known to have worked in Weston.

In the 19th century, Conant Road was known as the “road to Lincoln” and later as Forest Street.  The name change to Conant Road seems to have occurred about the turn of the century.

The earliest house in the Lower Conant Area is the Gowell / Parker House at 25 Conant Road (ca.1873, Map # 4), built for William N. Gowell, one of Weston’s best-known carpenter-builders. Gowell bought 10 acres of land from Michael Casey in 1873. Gowell’s house is shown on the 1875 map. Gowell is listed in the 1887 directory as a carpenter and in the 1893 directory as a contractor and builder, with a house and also a shop on Forest Street. According to relatives, he was known as the “town carpenter.”

Gowell subdivided and developed his property over the next decades. In 1892 he sold the lot at what is now no. 33 to Florence E. and Benjamin R. Parker. Florence E. Gowell Parker was the daughter of William N. Gowell. Benjamin Parker is listed in the 1893 directory as an employee of the school furniture factory, which was located in the Crescent Street Area (see Area Form A). By 1906 he had opened a store on Central Avenue, dealing in hardware, paints and oils, bicycles and bicycle sundries, and bicycle repairing, as advertised in the 1906 directory. Because of the family relationship, it is probable that William N. Gowell was the builder for the Benjamin R. Parker House at 33 Conant Road (ca.1892-3, Map #9). In the later years, Elizabeth Parker, daughter of Benjamin and Florence Parker, moved into William N. Gowell’s house at 25 Conant Road, where she lived for many years. 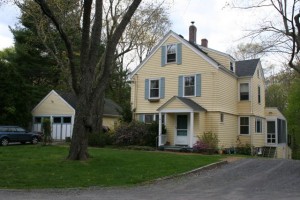 William N. Gowell was probably also the builder of the two houses at 16 and 20 Gowell Lane, located at the end of a narrow lane on part of the Gowell land. Gowell owned these houses at least until 1908, when they appear on the map under his name. These two Gowell Lane houses are earlier than the other two on the street and appear to date to the late 19th century.

The other properties in the Lower Conant Area were developed on land that had been part of the Lamson Farm. In the late 1870s, after the death of her husband, the widow Elizabeth Lamson sold some of the family land on the north (east) side of Conant at the corner of Church Street. The corner lot at no. 3 Conant was sold for a parsonage for First Parish Church. The 1877 parsonage burned and was replaced by the present 1913 structure (MHC 207), which is included in the Boston Post Road National Register District and therefore is not included in this area form.

In 1878, the second two lots on that side of the street were purchased by Justin E. Gale (1843-1918), who built the Justin E. Gale House at 15 Conant Road (ca. 1880, Map #2, MHC 259). According to Elizabeth Parker, the house was built by her grandfather, William N. Gowell. For a few years after its construction, Gale lived in Cambridge during the winter, but later Weston was his year-round residence. During his career, Gale served as a teacher, the head of a young ladies school in Cambridge, principal of Weston High School, and business executive with various Southern mills and enterprises (see also inventory form for 15 Conant Road.) After Gale’s death, the house was occupied by his son, Lyman. The barn/carriage house for the Gale property has been converted to a house at 17 Conant Road (ca.1880, Map #17).

By the late 19th century, Elizabeth Lamson had died and Daniel S. Lamson, trustee of the estate, began selling off lots on the south (west) side of Conant Road. At the turn of the century, the Lamson Farm property still included more than half the large tract of land bounded by Conant Road, the Central Massachusetts Railroad tracks, Concord Road, and Central Avenue (now Boston Post Road).

The land on Conant Road had become more desirable with the advent of the Central Massachusetts Railroad, which was incorporated in 1869 but floundered during its first two decades of limited operation. In 1886, it was taken over by the Boston and Lowell Railroad, which laid additional tracks and began more frequent and reliable service. At least some of the residents who built houses on Lower Conant Road at the turn of the century may have used the train to commute to jobs in Boston.

In November, 1894, Daniel Lamson sold 1.73 acres at what is now no. 22 to Lyman W. Gale. The Lyman W. Gale House at 22 Conant Road (Map #15), nicknamed “Box Cottage” appears to date from 1895, when Lyman Gale was taxed for a dwelling valued at $1,500. Gale (1873-1960), the son of Justin E. Gale, grew up across the street at 15 Conant Road and graduated from Harvard College in 1894. He married Jane Loring Winsor, sister of Robert Winsor. He took a position with Kidder, Peabody & Co, bankers, in 1894 and was a member of the Boston Stock Exchange beginning in 1905. His office was at 115 Devonshire in Boston. After the death of his father, Lyman Gale moved to the family house at 15 Conant Road. At various times after 1919, he was executive or treasurer of Wellington Sears mill; and he succeeded his father as treasurer of Brookside Mills in Knoxville, Tennessee. Gale moved to New Hampshire in 1941.

In December, 1894, Daniel Lamson sold a parcel of land, now 12 and 18 Conant Road, to Ellen Payson Hubbard, described in deeds as a single woman of Boston. The Ellen P. Hubbard House at 18 Conant Road (Map #16) was probably built within the next few years. In September, 1906, Hubbard sold part of this land to Mary L. Hubbard, who built the Mary L. Hubbard House at 12 Conant Road about 1907 (Map #17) Both Hubbard houses are shown on the 1908 map.

About this time, Lamson also sold the land at 6 Conant Road at the corner of Church Street, where a house was built for Charles F. Richardson (MHC 205). This house is included in the Boston Post Road National Register District and for this reason is not included within this Area form. However, it is part of the same development pattern.

In 1904, Daniel Lamson sold two lots on the south(west) side of Conant Road near the railroad tracks to Arthur Woodward. Woodward kept part of this property, which he subdivided into three lots off a small lane, which bears his name. These three houses, which use as their addresses 42, 44, and 46 Conant Road (Map #10,11,12) were all built between 1904 and 1908, when they appear on the 1908 map. Woodward sold the rest of the land to Howard L. Cooper in 1906. Cooper further subdivided the property, selling the street frontage to Charles R. Cole that same year. The house at 32 Conant Road (Map #14) was built within the next two years, perhaps by Cooper himself, who is listed the 1906 directory as a carpenter. Cooper was involved in other land deals in Weston at the turn of the century, which may also have involved the building of houses. In 1896 he subdivided two lots on what is now Case Estates land and built the house at 102 Wellesley Street (see inventory form) which he owned until it was purchased by Marian Case in 1909. He also bought and resold the lot at 49 Wellesley Street in the Maple Road / Wellesley Street Area and may have built that house as well.

In the second decade of the 20th century, two more houses were built on Gowell Lane. In 1912, Thomas Bassett purchased 1/2 acre from William N. Gowell and built 12 Gowell Lane (Map #6). Bassett was a partner in a lumber business in Waltham, and he is thought to have built the house himself. It is still owned by a member of the Bassett family. A few years later, about 1916, the barn originally attached to the Gowell / Parker House at no. 25 was detached and moved to 8 Gowell Lane (Map #5), where it was converted to the present Colonial Revival house. For much of its history, this house has been occupied by members of the Parker or Gowell families.