Description
The northern end of Summer Street, between #11 and #51, is an area that conveys a distinctive “sense of place” despite a wide diversity of house styles ranging in age from 1860 to 1963. It is, perhaps, the historical connections, as explained in the Historical Narrative, which contributes to some sense of cohesiveness along the approximately 1200 feet of street frontage represented in this area form. This part of Summer Street is directly adjacent to the Boston Post Road National Register Historical District.

The Dennis Keefe House at 22 Summer Street, constructed about 1860 in the Italianate style, is the oldest in the Summer Street Area. (2010 photo)
Character
The 16 frame houses within the area include one Italianate, 4 gable-front Queen Anne, 8 Colonial Revival, and 1 English Cottage style. The architectural interest of some of these houses is enhanced by the character of the street, which is one of Weston’s early roads and is an officially designated Scenic Road. The synergy between the natural landscape and architecture is most notable on the properties of #26 and #30 Summer Street, where the 70-foot wide Keefe bank barn can be viewed across a sloping piece of land with an old orchard.

Dennis Keefe House
The earliest house in the upper Summer Street Area covered by this form is the Dennis Keefe House at 22 Summer Street (ca. 1860, MHC 359, Map #14). This small, well-preserved Italianate house is important to Weston as an example of the simple versions of common house styles built in Weston during the mid-19th century, when Weston was a country town of little wealth or pretension. The 2 1/2 story, side-gable clapboard house has a 3 X 1 bay main block and a two-bay, two-story ell. The center entrance on the front facade is sheltered by a hip-roofed hood with decorative brackets and drop finials at the corners. Another typical feature of the period is the two-story square bay on the south gable end.

Keefe Family Bank Barn
Perhaps the most outstanding early building of the neighborhood is the huge Keefe family bank barn of weathered, unpainted clapboards, now located on the property at 26 Summer Street (19th c., MHC 358 (barn #), Map #13). The barn, which is thought to date from the late 19th century, is the only one of its kind in Weston and is highly visible from the curve of Summer Street, where it can be viewed across the property now owned by 30 Summer Street. This pastoral scene is enhanced by the topography and landscaping of the site, which includes a small orchard. The rectangular 1 1/2 story barn measures about 70’ X 30’ and is 3 bays wide at the gable end and 12 bays wide on the south side visible from Summer Street. (For further information see individual Form B).
Other Keefe Family Houses
Two Keefe family members are thought to have built the 2 houses directly north of #22, at 12 and 16 Summer Street (ca.1895, MHC 578 and 577, Map #17 and #15). These houses are very similar, although not exactly identical, in style and detailing. Both are 2 1/2 story Queen Anne gable front houses with one-story, shed-roof porches across the front. 12 Summer Street lost some detailing when covered by vinyl or aluminum siding but retains its turned porch posts, decorative cut out brackets, and railing. Window sash are 6/2, 2/2 and 8/2. 16 Summer Street retains its clapboard cladding but now has a screened front porch. Windows are 6/2 with shutters, except for the Colonial Revival style round-headed window in the gable and the oval decorative window to the left of the front door. A third house of similar massing was built on the same lot as #12. This house, at 14 Summer Street (Map #16) appears on a plot plan of 1924 but probably dates earlier. 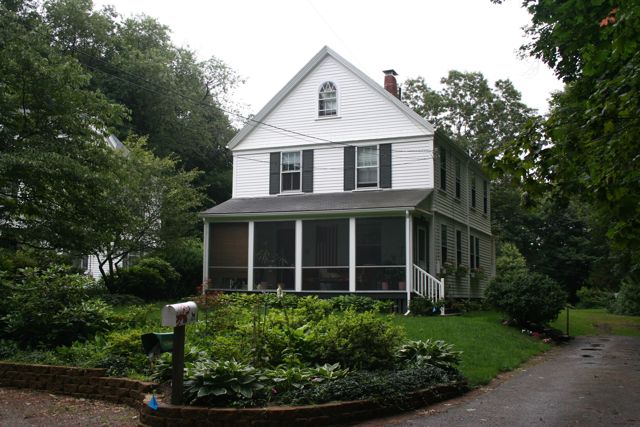 Clarence Fleetwood Mosher House
The same 2 1/2 story, gable-front massing was still being used 15 years later for the Clarence Fleetwood Mosher house at 51 Summer Street (1912, MHC 573, Map #8). The original small 2-bay, clapboard house has been greatly expanded with the addition of a wing and garage in compatible style.
Sherburne House
Dennis Keefe’s daughter and son-in-law, William and Joanna Sherburne, were probably the builders of the next house in the neighborhood, 42 Summer Street (ca.1914, MHC 574, Map #10.) This solidly-constructed, well-preserved 2 1/2 story, gable-front house is notable for its wrap-around porch, supported on simple thin columns used singly or in 3’s, and its wide overhanging eaves and unusual gable returns on the front facade, where the eaves are terminated somewhat awkwardly at the corners. The use of brown shingles and tan trim preserves the original early 20th century look of the house. The original barn remains at the back of the property (MHC 575, Map #10A) This 1 1/2 story shingled structure stands with its three-bay gable end facing the street. On the south side are two vehicle openings, with early wooden vertical board doors, above which is a wall gable which provides entrance into the hay loft.

Style
The style of 42 Summer Street, with its vertical massing, dark coloration and somewhat idiosyncratic Colonial Revival design, forms an interesting contrast to 33 Summer Street (ca.1912, MHC 571, Map #5), a large Colonial Revival house more sophisticated in its use of Colonial Revival forms. The 2 1/2 story, 5 bay, hip-roofed house is asymmetrical in fenestration and features an off-set left entrance porch where paired columns support a dentil cornice with balustrade above. To the right of the entrance is a large window, arched in a semi-circular fanlight pattern, with keystone. The house has well-detailed one-story porches at both ends. The shingle cladding is laid to give a banded look. The house has a matching one-story, hip-roofed garage with cupola probably of the same age as the house (Map #5A).

30 Summer Street
Two 2 1/2 story, side-gable, Colonial Revival houses typical of the 1920s were built next on the east side of Summer Street on former Keefe land. 30 Summer Street (ca.1923, MHC 576, Map #11) is a 3 X 2 bay clapboard Colonial Revival with the typical side sun porch. The central entrance door is ornamented with an elliptical fanlight and sidelights and sheltered by a pedimented one-story entrance porch. Window sash is 6/6 and 8/8. Next door at 26 Summer Street (ca.1926, MHC 357, Map #12) the house is five bays across, with a central, pedimented, enclosed vestibule with sidelights and a paneled door. This house was built on the foundation of an old Keefe farm barn and utilizes the frame and other barn fabric that could be incorporated in the new Colonial style house.

41 Summer Street
Another house from the 1920s, this time on the west side of Summer Street, is a sophisticated architect-generated design which, like the house at #33, stands in some contrast to the “homegrown” houses on the east side. 41 Summer Street (1927, MHC 572, Map #7) was designed by architect Clifford Allbright for his sister-in-law, Grace Bentley Crouch. The English Tudor influence, seen, for example, in the steep pitch of the front-facing gable, is also evident in another of Allbright’s designs in Weston, at 222 Boston Post Road (see Form B), designed for Grace’s sister. 41 Summer Street is picturesque in its asymmetrical massing and fenestration. Principal design features include the large, front-facing brick wall chimney and a polygonal dormer over the front, shed-roofed screened porch.
Government Websites by CivicPlus®
[]